The sea is crystal clear and warm all summer.

We will be in Skala Eressos on the island of Lesvos (sometimes called Lesbos or Mytilini). The island is uniquely beautiful and the eastern side where the retreat is held is characterised by the dry volcanic rock and landscape in summer.  It is the third largest of the islands in Greece behind Crete and Evia and is in the North Eastern Aegean, close to the coast of Turkey.

The sea is crystal clear and warm all summer.

Skala Eressos is a particularly powerful place for writers.

There were many poets and writers who lived on Lesvos but none more recognised than Sappho, a female poet and lyricist, reportedly called The Tenth Muse by Plato.

Lesvos was named after a God who held that name and early residents worshipped Cybele, the great mother-goddess of Anatolia.  Aristotle lived on Lesvos for about three years and studied Zoology while Terpander invented the seven note musical scale for the lyre. Even the airport at Mytilini is named after a poet (Odysseas Elyitis).

It is place rich with the muse of writing.

The island has stunning beaches, beautiful landscape and a colourful past with historical and religious archaeology. There are a large number of hot therapeutic springs and a petrified forest, with fossilised trees dating back some 15 million years.

Read more about Lesbos in this travel guide
​

Read one of our writer's stories about The Ladies of Lebsos
​

So. How do you get there?

Sigh. Greek islands are never easy to get to. But part of the fun is just getting there. And we are going to make it as easy as possible. You end destination is Mytilene, the capital of Lesvos and the only airport on the island of Lesvos.
When you fly you need to end up in Athens (Eleftherios Venizelos/ AIA). Your challenge / trick is to juggle the connection to Mytilene via an island hopper flight or a ferry.

STEP 1: ATHENS
When you fly you need to end up in Athens (Eleftherios Venizelos/ AIA).
There are some European airlines that operate direct flights into Mytilene in the summer. Thomas Cook has a weekly flight ex Gatwick.

STEP 2: Connecting Athens- Mytilene (Lesvos)
There are two options here: a small island hopper flight of 45 mins or an overnight ferry. The ferry is an adventure and unmissable Greek experience.

STEP 3:  Mytilene, Lesvos - Skala Eressos
You just need to get to the capital of the island, and we will take care of everything else. Your transfer will take you to the village of Skala Eressos  - an 1.5 hour drive from the capital. 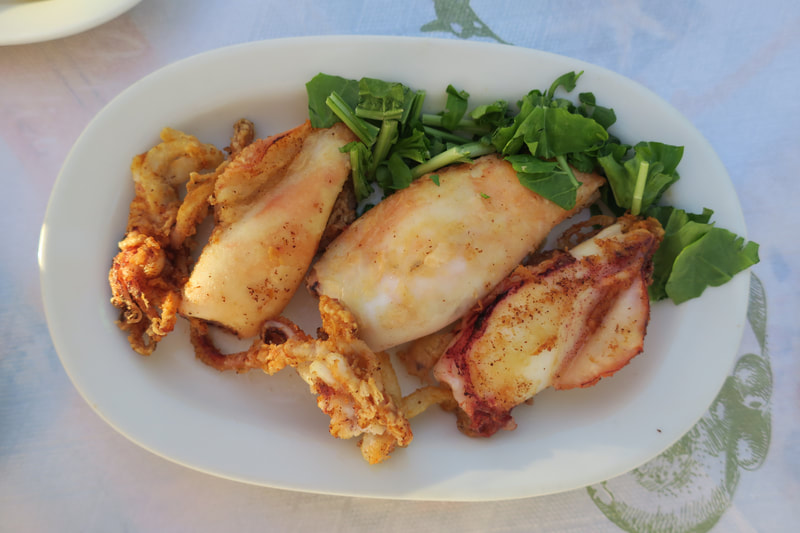 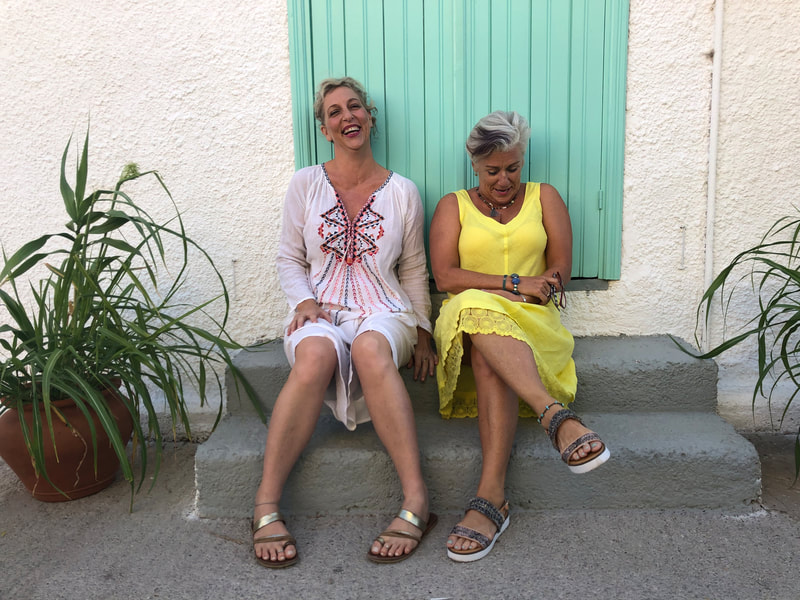 Top lawyer Nicholas Lambrianos is the author of It Shouldn’t Happen to a Lawyer. He joined us on a writing retreat in Greece and decided to join the women-only swim to The Rock. This is his story

Write your Book' the post read. 'Join us on a writing retreat on the beautiful Greek Island of Lesvos’.

I had in fact written a book, which had been percolating in the bottom drawer of my night table for a few years. Here was the opportunity to expose it to the light, not any light, but the warm sun of Lesvos with beautiful beaches and the gin-clear waters of the Mediterranean Sea.

The hosts Sarah Bullen and Kate Emmerson looked friendly. The bait had been cast. Kim my long-suffering wife was thrilled at the suggestion and immediately commenced with the arrangements before I could re-consider as I am prone to do.

I Googled Lesvos, as one does, and was interested to discover that Skala Eressos, the village on Lesvos where the retreat was to be held. I found was not only the home of Sappho the ancient Greek poet but the European capital of Lesbianisim. Various sites offered 'Women only tours', ' Lesvos and the lesbian experience'. Nudist beaches for women only. I was mildly alarmed. While I am respectful of others preferences and consider myself a liberated Greek South African man (which is in fact an oxymoron) the prospect of being overwhelmed by many women none of whom desired me felt like a cold shower on a winter morning.

Kim was unfazed by my concerns.

'Possibly I can have a Shirley Valentine experience with a women' she said.
' You can use the opportunity to explore your feminine side'

Besides the revelation that Lesvos was for the ladies the other prominent feature of Skala Eressos was the presence of ' The Rock' -  a huge stone, which looked as though it had risen out of the depths of the sea to guard over the ladies of Lesvos.

When the much-anticipated itinerary and program arrived from The Writing Room a daily swim to The Rock was included as a morning activity. I regard myself as a competent swimmer and decided a daily swim was just the antidote needed to the gorgeous Greek food and ice cold beer which would be consumed in vast quantities. I was totally prepared for the swim to 'The Rock'.

As soon as the taxi had unceremoniously dropped us a few blocks from our hotel,
as Greek taxis do - I immediately went in search of 'the Rock'. It wasn't difficult. ' The Rock' rose like as enormous obelisk from the sea what appeared to be many miles from the beach.

ear turned to panic and I began to wilt in the forty degree heat. I had been very vocal about how I would swim to that rock everyday. If the ladies of Lesvos could do it so could I.

My salvation came in the form of a very clear directive from the retreat organizers.

'You cannot swim to the rock alone.”

Even better news was that the ladies of Lesvos had an organized swim every day but no men were allowed. I had been saved by Saint Jude the saint of hopeless causes. Foolishly however instead of graciously accepting the gift which had been offered I decided to pee directly into the oncoming wind.

I complained to all who would listen that this was exclusionary, sexist and an affront to my sensibilities.
Regrettably my protestations did not fall on deaf ears. Word of my outrage reached the ladies of Lesvos. I was advised that the ‘ladies only’ rule was inalienable and that no exceptions could be made BUT the ladies would accommodate me by having a second swim on a designated day in which I could participate.


I arrived at the designated place at the specified time. The organizer suggested that I swim with the group. She advised that flotations devices would be provided if necessary. In addition a 'rescue boat' would manned by two ladies would accompany us in case I got into difficulty.

I was outraged. What was this swimming for beginners? ' The Rock' although a worthy challenge was well within my capability. It would never defeat me.

By the time I negotiated the pebbly beach and acclimatized to the cold water some of the ladies had set off with vigor and were disappearing into the setting sun. I started to swim with the gentle waves lapping my face. By the time I took my first breath The Rock had disappeared from site hidden by the choppy water. The swimming was a little more heavy-going then I had anticipated but no reason for alarm. I swam hard and with purpose but when I turned back to see how much ocean I had covered I was dismayed to see the beach was remarkably close by.  I noticed that I was discreetly but very definitely being shadowed by a few ladies who were swimming effortlessly while chatting animatedly. The rescue boat was also close by. No problem 'the Rock' was easily within my reach.

I decided that as I was tiring quickly I should slow my pace. My strokes became shorter my breathing more labored. I began to value the presence of the ladies. I however refused the first offer of a floatation device. Ten minutes later I gratefully accepted it as the first thoughts of abandoning the swim drifted on the cold water. I could not. I could not loose face and be shown up by the ladies of Lesvos who I had now decided should more charitably be called the Good Samaratains of Lesvos. The floatation device, which was now lodged under my hips, was impeding my swimming. Abandoning it was not an option however. I had no doubt if I did so I would sink into the depths and be consumed by crabs.

'Dig deep. Dig deep' I repeated the mantra.
'Dig! Dig! You have dug a hole for yourself and you are going to drown. You sexist bigot! You idiot!

'The Rock' was now in sight. Populated by women singing, laughing and holding the Rainbow flag the symbol of pride of the homosexual community. Each rotation of my arms was agony.

' Nearly there' one of my chaperones offered in encouraging tones.

Some of the swimmers passed me on the return journey. There would be no return journey for me? I would make a home on 'The Rock' if necessary but I wouldn't …. couldn't swim back.

At last my hands touched 'the Rock'. Beaten by all the other participants and accompanied by my chaperones and the rescue boat I had made it. Chastised but grateful I boarded the rescue boat.